Sweeping through the sky, driven by cold fronts and the coming snows; heading southward and westward to the central California coast, where sunny days and mild breezes await. The journey is treacherous, with predators and sudden storms poised to take a toll, but many get through, ending up in a few coastal towns in a few parks and on a few trees, where they roost by the hundreds and sometimes thousands.

As a fifth grade student back in Michigan, now many decades ago, my teacher, Mrs. Triff, took us on a field trip to see migrating Monarchs at Point Pelee National Park in Ontario, Canada, which sticks down into Lake Erie like an arrowhead. There the migrating Monarchs are stopped in their flight path by the barrier of Lake Erie and concentrate there until the winds are favorable to continue the journey to Mexico's mountains. The extraordinary experience of seeing so many beautiful creatures in one place never left me, so I jumped on the chance to see them again.

In January of 2020 we traveled to Santa Cruz and Pismo Beach to see the winter gathering of Monarchs. We had read about it for years, but there is nothing like seeing a magnificent gathering in person. These pictures are from the two balmy days we spent along the California Coast.

In Santa Cruz, we got directions to where the Monarchs were gathered, which happened to be next to a large surfing competition for young people (what could be more Californian than a sunny day filled with surfers catching the waves rolling in?). Meanwhile, the 2,500 or so Monarchs were tightly clustered on two individual trees: a Monterey Cypress and a Blue Gum Eucalyptus. In the clusters the Monarchs hung upside down, their wings tightly overlapped and the exposed wings were the undersides, so there were patterns but with the subdued colors more suitable for camouflage. When a Monarch flew into the roosting group, several butterflies had to resettle themselves to accommodate the newcomer, briefly flashing the vivid orange-and-black patterns on the tops of their wings. We found the experience extraordinary, but local old-timers (our age!) who walked or cycled by said that this was NOTHING compared to the butterfly gatherings of their youth, when apparently the California coast was a Woodstock for butterflies. But then Jimi Hendrix died and the world went to hell and all we have left is fond memories of our youth. But I digress ...

The butterflies apparently come to the same trees each year, which is extraordinary, since NONE of the butterflies here this year were here last year. When they start their migration, the generation of butterflies heading south and west from all over the western states and western Canada are bigger, stronger, and brighter than the Monarchs of summer gardens. These SuperMonarchs are able to fly up to thousands of miles to those few trees guided by what: Genetic memory maps? Scents left on trees? Scientists don't agree on the mechanism, although day length and perhaps the drive for food as the north gets colder in the fall are the triggers for starting the migration. For a fascinating discussion of the theories, go to https://en.wikipedia.org/wiki/Monarch_butterfly_migration.

After leaving lovely Santa Cruz and Monterey Bay, we drove south to another winter Monarch gathering of about the same size in Pismo Beach. Here the Monarchs were gathered on a few eucalyptus branches, with an endless stream of people migrating toward them on the path below, and pausing in a cluster to look up in wonder. Some of the Monarchs were getting in the mood for mating. An aggressive male would force a receptive female to the ground and laboriously try to pick her up. When he did, he would take her on a maiden flight into the treetops where, as the volunteer tour guide explained to the children, "they went for their honeymoon." Extraordinary!

When spring approaches, the Monarchs begin their northward journey. The fact is, unless their summering grounds are near their wintering grounds, NONE of these individuals will make it. They procreate along the way, leaving eggs to hatch on milkweed plants. Then the hatched caterpillars voraciously feast on the milkweed, gaining nourishment and toxins (to repel predators), followed by the miracle of entering a chrysalis with golden stitches and eventually emerging as butterflies. Then the new butterflies head north, and repeat the whole process several hundred miles on, and so on for three or four summer generations. Then, come fall, the whole cycle repeats as a new SuperMonarch begins the migration south. And my sense of wonder is refreshed.

All of the photographs here can be licensed for publication or printed by the photographer as a limited-edition print. Please click on the $ button at the center bottom of each photo for options. 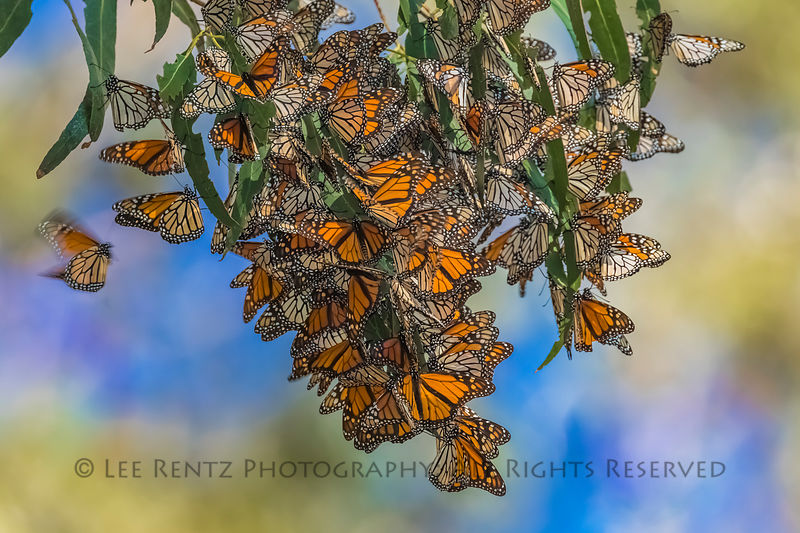 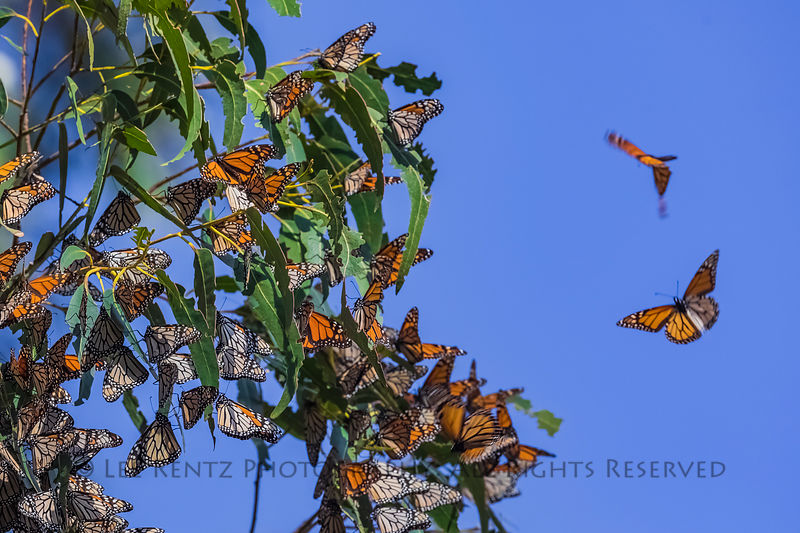 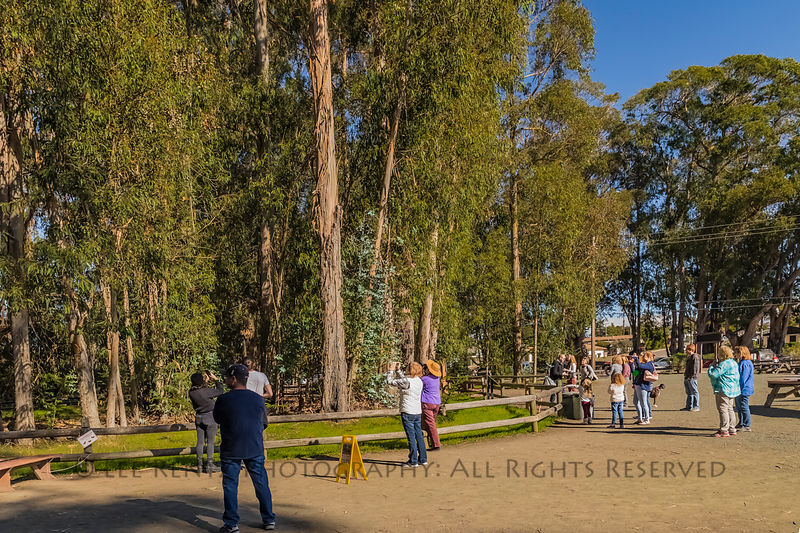 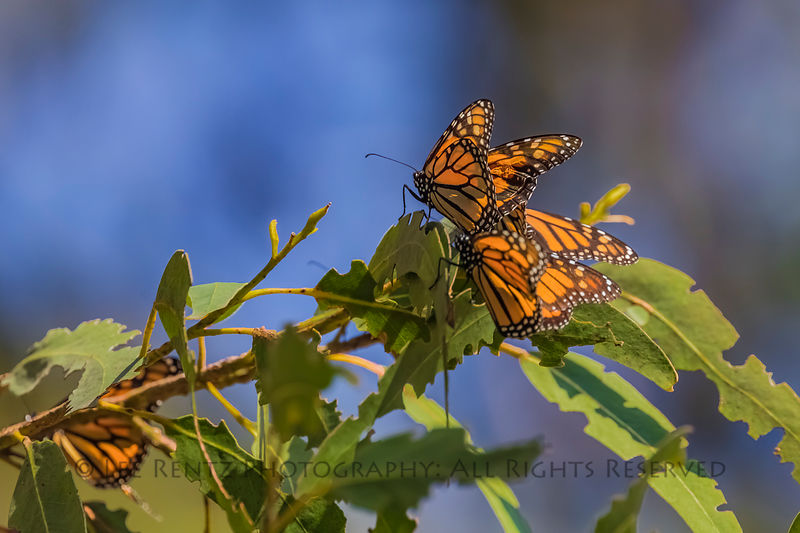 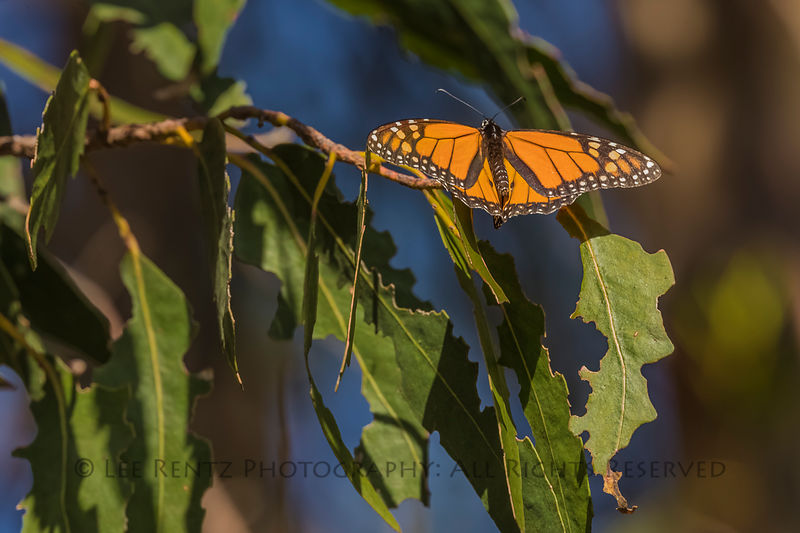 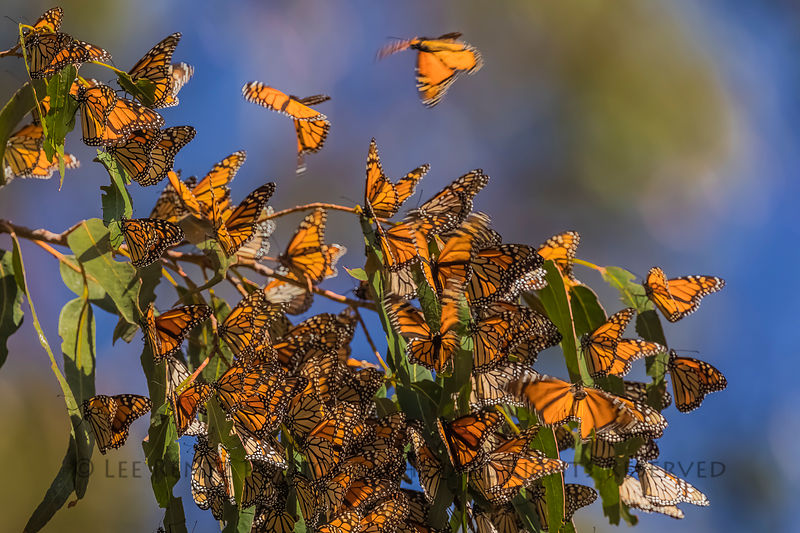 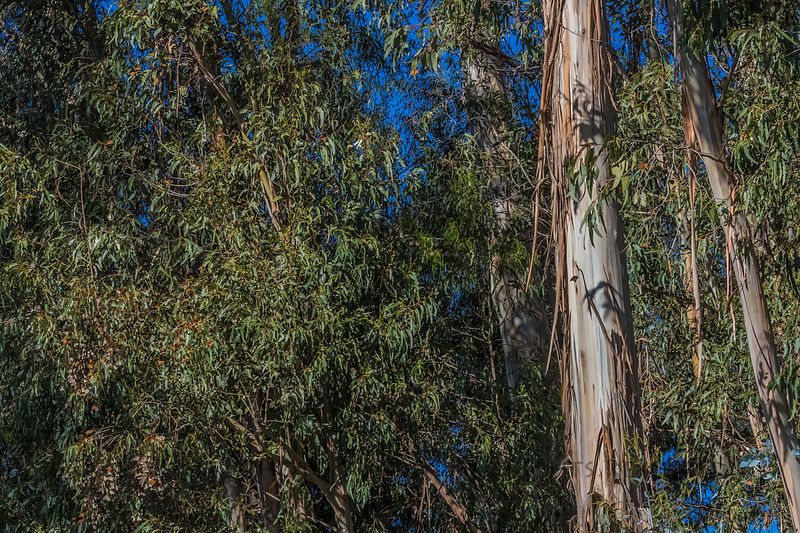 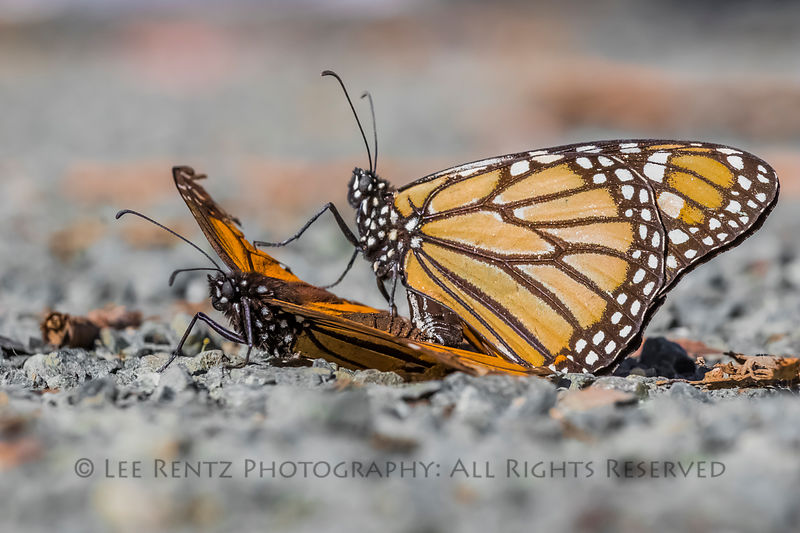 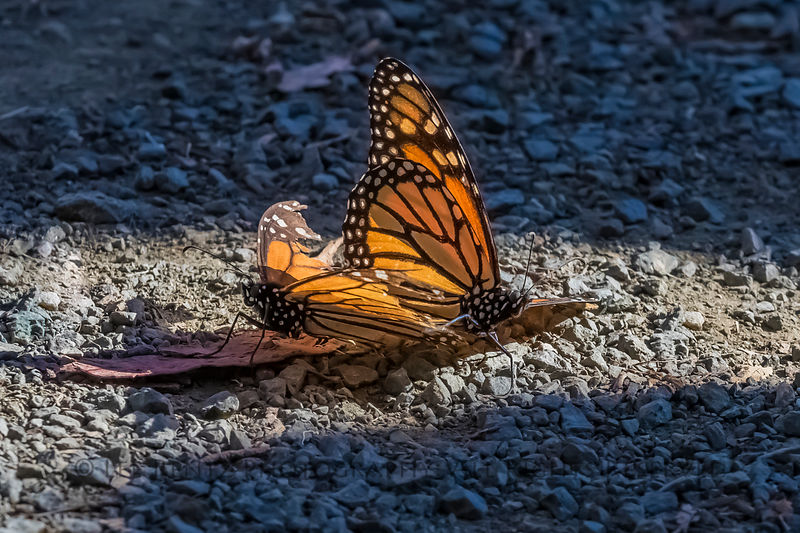 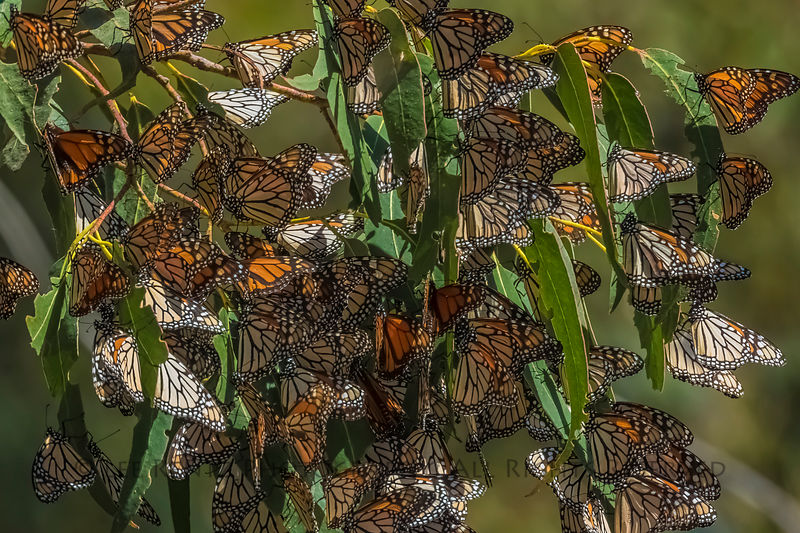 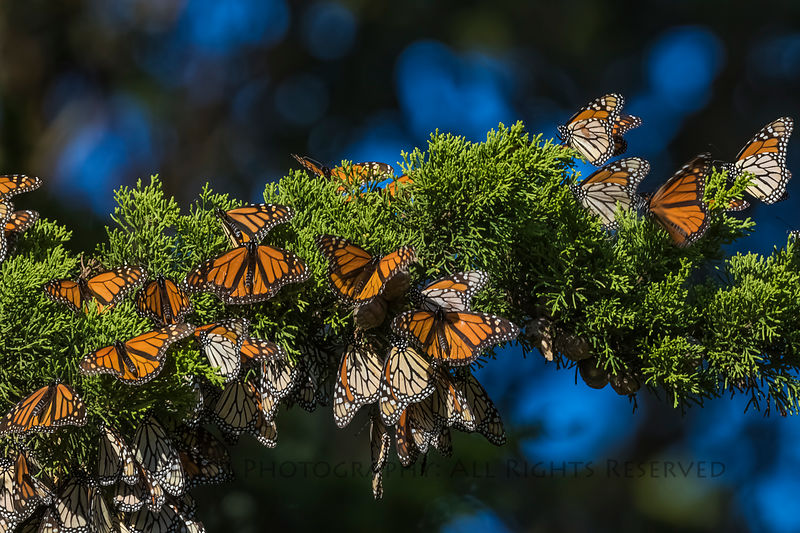 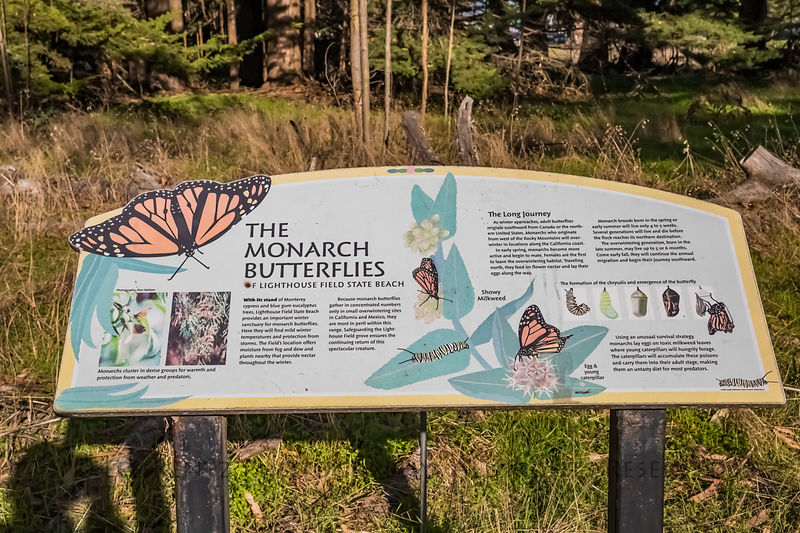 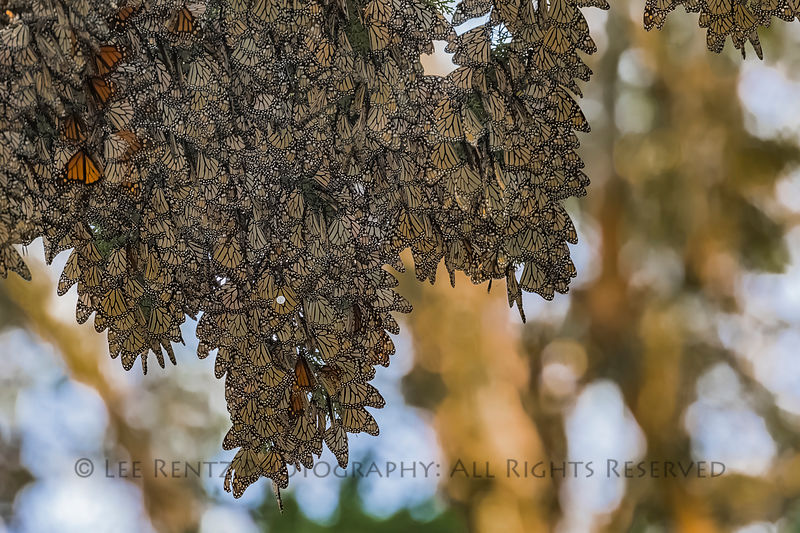 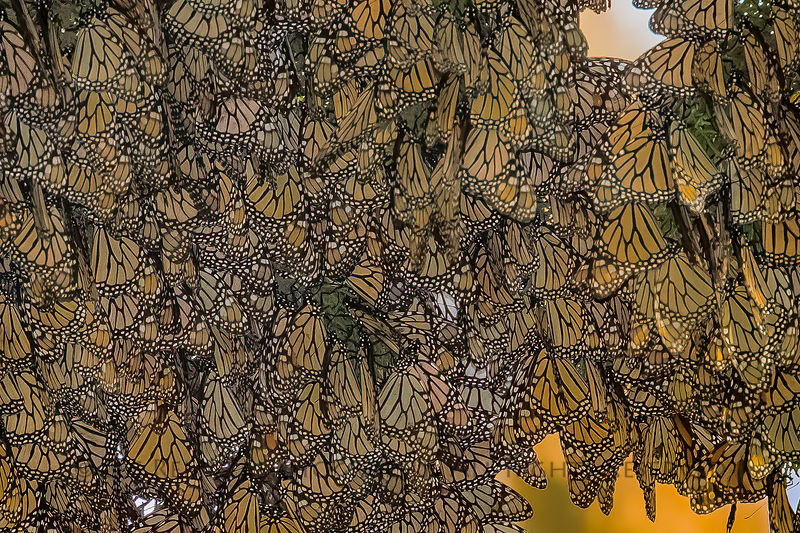 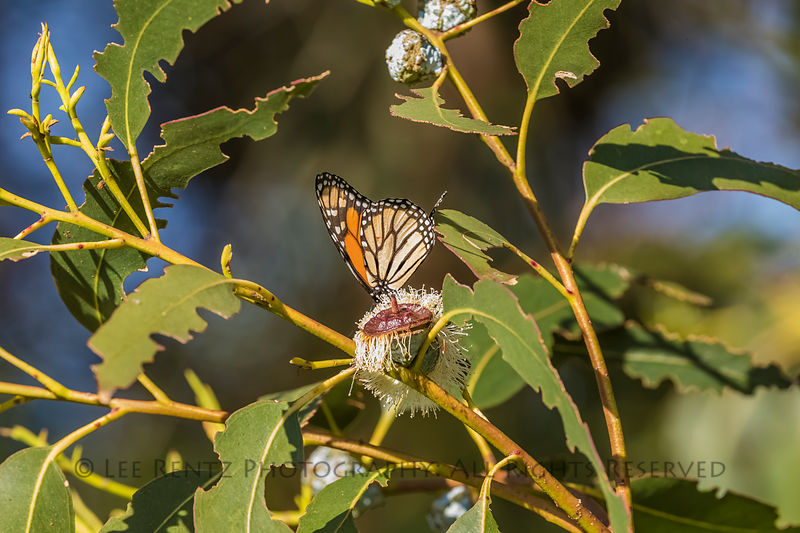 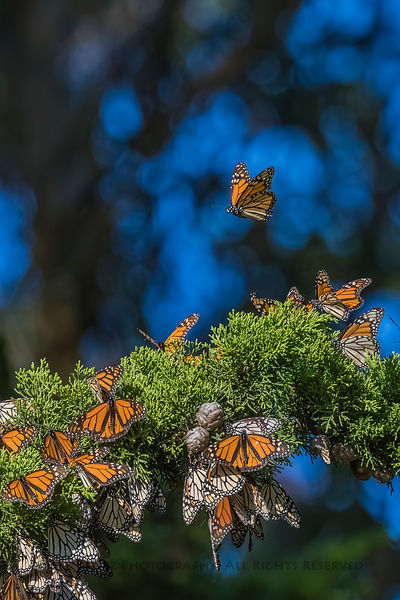 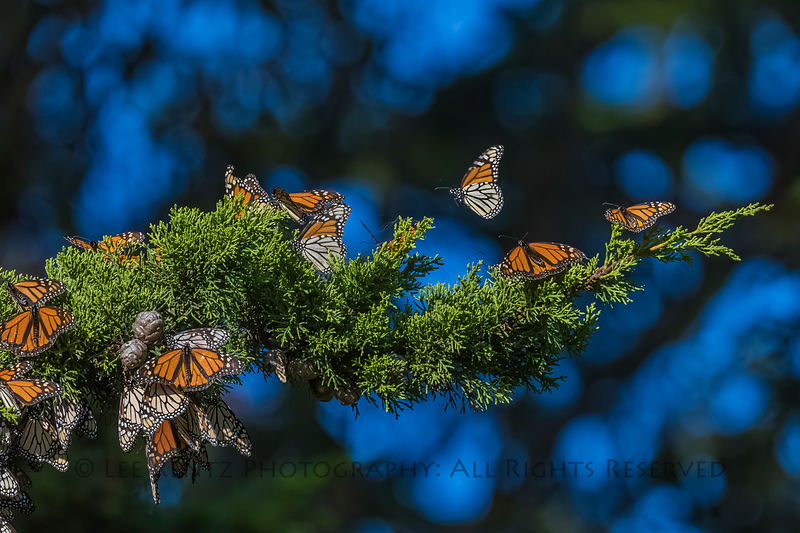 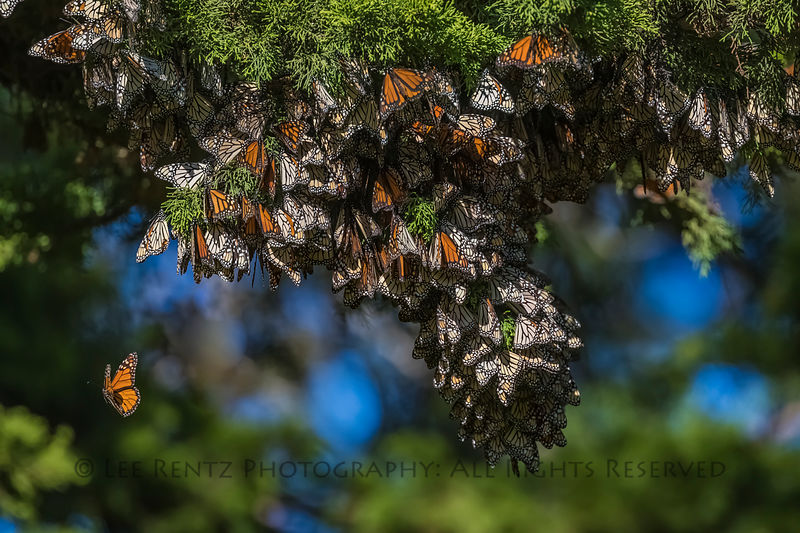